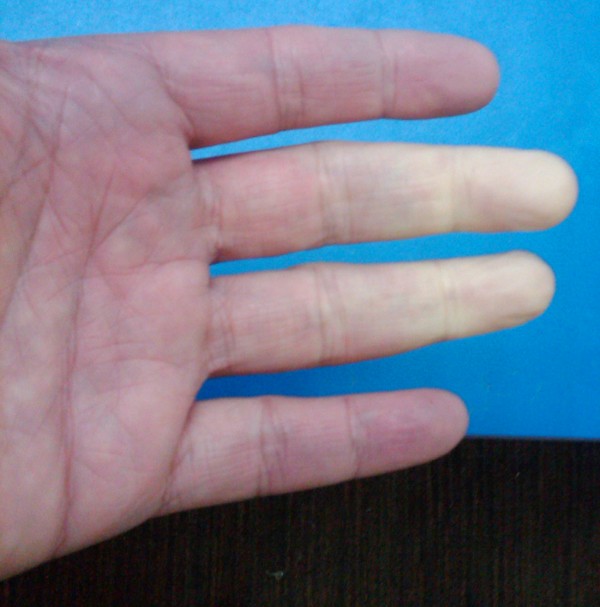 There are many individuals whose hands and feet are very sensitive to cold or emotions resulting in blanching, pain and numbness of the fingers and toes. The condition is episodic and is known as Raynaud’s phenomenon. In severe cases this can progress to local ulcers and gangrene. This condition can also cause nails to become brittle with longitudinal ridges.

Primary or idiopathic Raynaud’s phenomenon (Raynaud’s disease) occurs without an underlying disease. In this situation the blood vessels of the fingers and toes are excessively sensitive to cold or emotional stimuli without any good reason. Raynaud’s disease accounts for 60 per cent of cases.

Secondary Raynaud’s phenomenon (Raynaud’s syndrome) occurs in association with an underlying disease. Most patients with scleroderma and about 30 per cent of patients with systemic lupus erythematosus have secondary Raynaud phenomenon. There are many other medical conditions which can cause Raynaud’s syndrome. Forty per cent of cases are secondary to other medical conditions.

The condition was first described in 1862 by Maurice Raynaud (1834-1881), a physician and professor in Paris. The onset is typically between the ages of 20 and 40 years, and it is more common in women than men.

In a general population it is difficult to estimate how many people suffer from this condition. But people who live in cool damp climates seem to have higher incidence (20-25 per cent). About 40 to 90 per cent of chainsaw operators and miners using vibrating equipment have Raynaud’s syndrome. Food workers who work in cold areas have about 50 per cent incidence of this disease. Raynaud’s has also occurred in breastfeeding mothers, causing nipples to turn white and become extremely painful. This may cause painful breast feeding.

In 2002, the New England Journal of Medicine described a case of a 54-year-old man who had an acute primary episode of Raynaud’s disease involving only the ring finger after surfing for 80 minutes in water that was 21°C. The episode persisted for 40 minutes. Medical evaluation subsequently revealed no disorder known to cause secondary Raynaud’s phenomenon.

Most patients with Raynaud’s syndrome have only mild symptoms, which respond well to simple conservative treatment, including wearing of warm clothes and gloves. Avoid cold environment and stress. Do not smoke. Avoid blood vessel constricting agents.

About 10 per cent of patients have sufficiently severe and frequent episodes to require drug therapy. Vasodilators are most frequently used. Many medications have been studied including vasodilators, platelet inhibitors, serotonin antagonists and fibrinolytics.

Recently, another erectile dysfunction drug tadalafil (Cialis) 20 mg has been tried. Compared to Viagra, Cialis has a longer half-life of 17.5 hours. The conclusion was that Cialis, in combination with other vasodilators, help reduce the severity of attacks but also helps heal digital ulcers.

Surgical treatment in the form of sympathectomy (division of autonomic nervous system) causes dramatic improvement in occasional patient but can be unpredictable and disappointing.