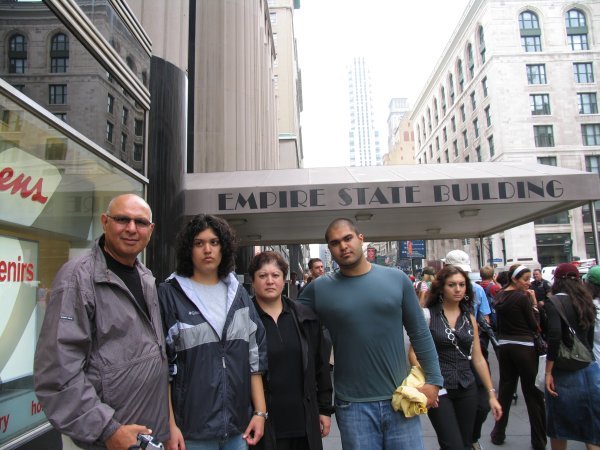 I never thought New York City would be a place where I would feel at home, be happy and feel healthy, especially after the events of September 11, 2001. I had booked my holidays with some trepidation. Now I can say I have no regrets.

In New York City, besides sightseeing and some shopping I was hopping to see my friend, Bhagwan. We were in college together 42 years ago. We went to different medical schools and lost touch. Couple of years ago, I Googled his name and discovered that he was a general surgeon like me working in New York City. I phoned him and we decided to meet sometime in the future. So I thought I will meet him and his family briefly for coffee, talk about old times and then do my own stuff.

I discovered the true meaning of friendship and New York City hospitality when Bhagwan and his lovely wife showed up at JFK airport to receive us. From then on Bhagwan, his wife and their wonderful three children took care of us and made this a real memorable holiday. The people of New York City are extremely nice and friendly. I felt totally safe and at home.

Few months before our departure from Medicine Hat , I had been in touch with the New York Citys official tourism office through their website (www.nycvisit.com). They were very helpful and supplied me with a press pass and information which helped me plan my stay in the Big Apple.

Our hotel was close to the Grand Central Station. We were within walking distance to the United Nations building, 5th Avenue, Times Square, Broadway and Empire State Building. So we walked a lot. We used the subway to take a ferry trip to see the Statue of Liberty. We used hop-on and hop-off tour bus to visit other tourist areas including the Central Park and Ground Zero, the site of World Trade Centre.

We were scared to go to Harlem but Bhagwan took us there to see the historic Capitol Theatre. Thanks to Bhagwan and his family we saw more than what we had planned. It was wonderful to walk around the Broadway and Times Square at midnight after a show and see streets full of happy people. No wonder New York City has been praised for courage and fortitude. In spite of the tragedy of 9/11, people are extremely nice and helpful.

Ethel Barrymore said, “The best time to make friends is before you need them.” To have good health one has to have good friends and a good social circle. I can say I have been very lucky to have friends like Bhagwan (which means God) and his family. That makes me very happy. And New York City has a new friend, me!