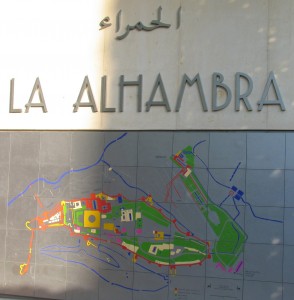 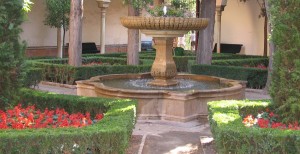 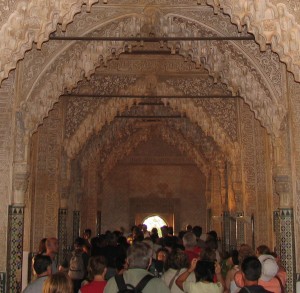 Noorali with Alhambra and Granada in the Background 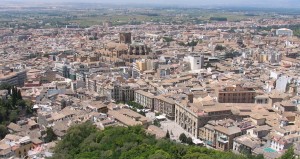 View of Granada from Alhambra

When you travel through Spain, you find each city has beautiful historical and cultural monuments and architectural gems of immense significance. During our tour, the one place which stood out the most was the world-famous Alhambra in Granada, Spain.

To understand and enjoy the beauty and majesty of Alhambra, one has to understand the complicated history of Granada and Spain. There was a time when Muslims, Jews and Christians lived in harmony. That was a long time ago. But that is a historical fact.

The Moors (Muslim inhabitants of al-Andalus and North Africa) ruled Spain, Portugal and North Africa for about 800 years. Spain was re-conquered by the Catholic monarchs from the Moors and the conquest was completed in 1492.

A complete tour of the monument may take anywhere from four to eight hours depending on your mobility, the weather and how much time you want to spend in each area. There is much to see, learn and enjoy. My advice would be to buy your ticket in advance online (www.alhambra-patronato.es) and get there early by 8 a.m.

Alhambra is a 9th century Arabian palace. The palaces of Alhambra were originally built by Ismael I for judicial administration. It was modified by Mohamed III in the 13th century to be used as his private residence. From the 13th century to the 15th century, Alhambra had been a palace, a citadel, a fortress and home of the Nasrid sultans. It also housed high government officials, servants of the court and elite soldiers.

The name Alhambra (an Arabic word) means “the red one” or “red castle” and refers to the color of the mountain on which it is built overlooking Granada on the southeastern border of the city. From Alhambra, one can have a beautiful wide view of the city and plain of Granada.

After the Christian conquest of Granada in 1492, Alhambra suffered neglect and mutilation. But it was soon realized that Alhambra is a rare natural beauty and the buildings were extensively restored after 1828 and are still well maintained. Alhambra has become the best conserved ancient Arabian palace.

Alhambra covers an area of about 35 acres (142,000 m²). It has fortified walls and is guarded by thirteen towers. Alhambra is divided into four main areas: the Palaces, Alcazaba (the military area), Medina (the city) and Generalife (agricultural estate).

Entry to Nasrid Palaces is strictly limited to the times indicated on the ticket. If you miss your turn you will not be allowed to see these Palaces. Only 300 people are allowed in each half-hour. You have to be in the building within half-an-hour of the assigned time. Once you are in you can stay as long as you want.

Historians believe that Alhambra is a true expression of the once flourishing Moorish civilization and is the finest example of its architecture in Spain. In a short article it is hard to describe in detail the four main areas of Alhambra. But each area is worth seeing.

The halls and chambers of the Palaces are surrounded by a series of open courts. The interior of the building has many magnificent examples of honeycomb vaulting. The walls and ceilings are decorated with geometric ornamentation of minute detail and intricacy. The work is beautifully done with outstanding skill in marble, alabaster, glazed tile, and carved plaster.

There are number of beautiful gardens. There are places to rest, eat and relax. Once you are in you can stay as long as you want. You can visit Alhambra by night as well. After a visit the beauty and history of Alhambra will be hard to forget.

One Reply to “Alhambra – an Arabian Palace in Granada, Spain”