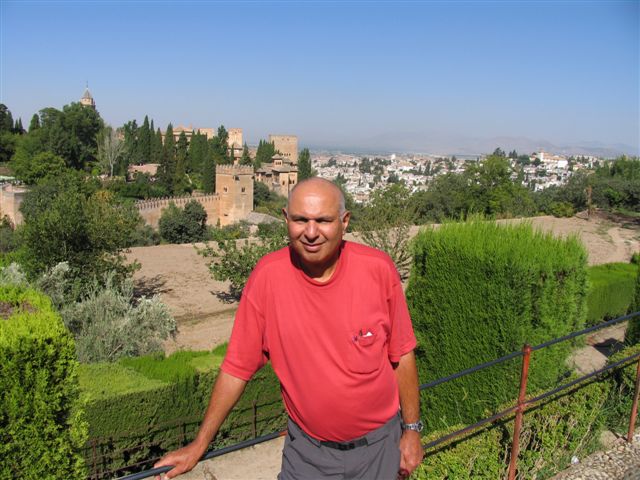 Dr. Noorali Bharwani poses in front of the world-famous Alhambra on the left and city of Granada, Spain on the right. Granada was a long-time capital of Moorish Andalusia. Alhambra is one of the most important Arabian palaces with lush gardens.

Every now and then go away,
Have little relaxation,
For when you come back to your work
Your judgment will be surer……
-Leonardo da Vinci (1452-1519)

From time to time I listen to Leonardo da Vinci and pack my bags and leave town to reflect on the past, the present and plan for the future.

For more than one reason, 2005 is an important year for me. Many of my personal wishes and dreams are coming closer to fulfillment. I feel this year I have reached an important milestone in my life. So it was time to take a long break and think where I need to be in the next 10 years.

So I packed my bags and treated myself and my family to four weeks of holiday. We spent three weeks in Toronto, Portugal (Lisbon, Algarve), and Spain (Seville, Granada, Cordoba and Madrid). Before that I took five days off and did some continuing medical education and golfing in Canmore and Banff.

The holiday was wonderful. In Toronto, we attended Musoma Reunion. Musoma is in Tanzania where I was born and went to school until Grade nine. Since there was no high school in Musoma, I went to a boarding school in Dar-es-salaam. Then I moved on to India, England and Canada. So I had not seen most of my friends for many years. I hate to say how many! But it was an eye opener to see how passage of time has aged people  including me! I still remember many of my friends in their school uniforms!

In Portugal and Spain we found the people to be nice and friendly. The history of these countries is very fascinating. From 1000 BC to AD 1179 Portugal was under occupation, from Romans to Moors.

Then came the Age of Discovery and Portugal became a powerful empire. Portuguese ships rounded the Cape of Good Hope in 1488, and in 1497 Vasco da Gama reached Calicut, India. By 1560, Portugal had claimed Brazil and many other countries.

Spanish history is very similar. First came the Romans, then Moors and then the Christians. A Moor is a Muslim Arab who lives in northwest Africa. Moors invaded Portugal and Spain in the 8th century and established a civilization in Andalusia that lasted until the late 15th century.

Muslims built mosques where the Roman temples were. Christians built churches where the mosques were. For hundreds of years Jews, Muslims and Christians lived in harmony until they started fighting to control the land. Islam brought to Europe mathematics, papermaking, oranges, spices and rice as well as unique Islamic architecture and planning which is visible even today.

Temperatures in summer are anywhere in high 30s to high 40s Celsius. Between 3 p.m. and 8 p.m. most businesses shut down for siesta. You have to organize your schedule for shopping, meals and tours accordingly. Bullfights are scheduled only on Sundays. People smoke everywhere.

Not all shops, restaurants and banking machines accept credit or Interac cards. So carry enough cash with you. All our flights were running late by an hour or more. This makes it difficult to catch connecting flights. Make sure you have about three hours lay over to be on the safe side. These days airlines do not give a damn about our comfort. The planes are packed like sardines and leg room between seats is minimal. Not to mention other discomforts in the planes.

But, you cannot walk to Portugal and Spain. So, we have to fly because these countries are worth a visit. Remember, every now and then go away…