Do you have sleep problem that leaves you chronically fatigued, sleepy and irritable?

If yes then you may have disorders like narcolepsy, snoring or sleep apnea.

Narcolepsy is a neurological disorder that affects the control of sleep and wakefulness. People with narcolepsy experience excessive daytime sleepiness and intermittent, uncontrollable episodes of falling asleep during the daytime. These sudden sleep attacks may occur during any type of activity at any time of the day.

Snoring is rough rattling noise made on breathing in during sleep by vibration of the soft palate and the uvula.

Sleep apnea is a potentially serious sleep disorder in which breathing repeatedly stops and starts. You may have sleep apnea if you snore loudly, and you feel tired even after a full night’s sleep.

Obstructive sleep apnea is more common form that occurs when throat muscles relax and block your airway during sleep and cause snoring. The other two are central sleep apnea and complex sleep apnea syndrome.

If you are a chronic snorer and your partner observes that you make a snorting, choking or gasping sound then you have a problem.

It is time to discuss your symptoms with your doctor and get a referral to a sleep specialist. You will undergo tests to confirm the diagnosis. The tests involve overnight monitoring of your breathing and other body functions during sleep. The test is called nocturnal polysomnography.

If you have obstructive sleep apnea, your doctor may refer you to an ear, nose and throat specialist to rule out any blockage in your nose or throat. An evaluation by a cardiologist may be necessary.

How to manage obstructive sleep apnea?

Guidelines (2014) from the American College of Physicians (ACP) emphasize lifestyle modifications – especially weight loss. Though the guidelines do not offer any radical treatment updates, they do reinforce the effectiveness of tried and true therapies.

Breathing devices are still best for treating obstructive sleep apnea. Continuous positive airway pressure (CPAP) works well. It is the first line of treatment. It has to be used during sleep. It relieves symptoms but does not cure the problem.

Oral appliances are useful. They are worn only during sleep. Research shows that oral appliance therapy is an effective treatment option. But does not cure the problem.

Surgery is the last option to be used if all else fails. There are many different types of surgery for sleep apnea and snoring. Surgery will not fix everything. You may need to continue using CPAP even when surgery successfully reduces the severity of sleep apnea.

Remember, surgery can have side effects and surgery alone will not fix all your problems. Discuss your options, long-term outcome and side effects of treatment with your specialist before going for surgery.

Reports indicate nearly eight in 10 married couples say their partner has a sleep problem, like snoring, insomnia, or incessant tossing and turning. Sleep difficulties force their partners into separate sleeping quarters. More than 20 per cent say they are too sleepy for sex.

You can blame this on too much work, stress, caffeine, nicotine, alcohol, 24-hour cable TV, the Internet and email.

Lack of sleep has consequences like increased blood pressure that raises the risk of heart attacks and stroke. Diabetes and obesity have also been linked with chronic sleep loss. People who do not get enough sleep are more than twice as likely to die of heart disease.

To stay awake people tend to eat more and that means they put on weight. They smoke more and drink too much coffee and alcohol. That means they are prone to motor vehicle collisions. They hurt themselves and hurt others.

For optimal health it is important for adults to consistently sleep around seven hours each night. When we sleep, the body rests and restores its energy levels. A good night’s sleep will help us cope with stress, solve problems and help us recover from illness.

If you have sleep problem then seek help. There are many ways to help diagnose and treat sleep disorders including snoring. Your family doctor can refer you to a sleep clinic.

American Heart Association wants you to know that the evidence is very strong for the relationship between sleep apnoea and hypertension and cardiovascular disease generally. If you are a snorer and have sleep apnoea then get proper treatment.

In a sleep study, doctors count pauses in breathing to determine whether the patient has mild sleep apnoea, characterized by five to 15 episodes per hour; moderate sleep apnoea, defined by 15 to 30 per hour; or severe sleep apnoea, meaning more than 30 each hour.

A sleep clinic can get you started with investigations and treatment known as continuous positive airway pressure (CPAP). The CPAP device involves wearing a mask while sleeping. It keeps the breathing passages open and oxygen flowing. It can yield fast results. Blood pressure comes down quickly. This improves your prognosis.

As a person who believes in getting enough sleep each night, I find Daylight Saving Time (DST) a nuisance. This disturbs my sleep rhythm for the next several months. Then I have to change the clocks again.

If I don’t like this then I can move to Saskatchewan or Hawaii, American Samoa, Guam, Puerto Rico, the Virgin Islands or Arizona where there is no such thing as DST. People are happy there. Having no DST has not ruined their economy.

The question is: Would you like one extra hour of sleep or sunlight?

The idea of DST is to have people up and about during the longer daylight hours, to save energy and increase productivity. In 2005, U.S. Congress and subsequently other countries expanded daylight savings time, by shifting its start to the second Sunday in March and its end to the first Sunday in November.

Has DST increased productivity? Has it improved people’s health and wealth? Have we saved any energy? Are we doing better than people in Saskatchewan or other places where there is no DST?

The DST began in Europe to conserve fuel during World War I. Since then it has gone through several changes. U.S. Congress passed the Uniform Time Act of 1966, which declared that DST be observed from the last Sunday in April to the last Sunday in October. Some exemptions were allowed. This has now changed to March and November.

In recent years several studies have suggested that daylight saving time doesn’t actually save energy – and might even result in a net loss. Studies have found that the practice of DST reduced lighting and electricity consumption in the evening but increased energy use in the dark mornings. So there is no gain as such.

As you may expect there are other studies which do show energy gains. The U.S. Department of Energy asserts that springing forward does save energy. Extended DST saved 1.3 terawatt hours of electricity. That figure suggests that DST reduces annual U.S. electricity consumption by 0.03 per cent and overall energy consumption by 0.02 per cent. While those percentages seem small, they could represent significant savings because of the enormous total energy use.

Does DST affect your health?

DST is supposed to boost your health by encouraging active lifestyles. Advocates of DST say that television watching is substantially reduced and outdoor behaviours like jogging, walking, or going to the park are substantially increased.

But others warn of ill effects. Some studies show that our circadian body clocks – set by light and darkness – never adjust to gaining an “extra” hour of sunlight to the end of the day during DST. This results in drastically decreased productivity, decreased quality of life, and increasing susceptibility to illness. People are generally more tired during the months of DST.

One expert says that one of the reasons why so many people in the developed world are chronically overtired is that they suffer from “social jet lag.” In other words, their optimal circadian sleep periods are out of whack with their actual sleep schedules. Shifting daylight from morning to evening only increases this lag.

A 2008 study in the New England Journal of Medicine concluded that, at least in Sweden, heart attack risks go up in the days just after the spring time change. The most likely explanation to the findings are disturbed sleep and disruption of biological rhythms.

I am not sure what the majority of the people think about DST, but I find changing my circadian cycle and my clocks twice a year is annoying, to put it mildly. Anyway, the sun is shining and we have an extra hour to enjoy the evenings. So, lets get out and have fun. 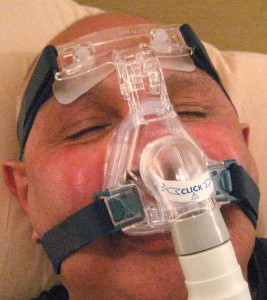 There are two main goals to be achieved when it comes to treating sleep apnea. First, to establish adequate ventilation. When you stop breathing your ventilation system stops. Second, to make sure your body gets enough oxygen.

There are three ways to treat the problem. Each treatment method has advantages and disadvantages. The treatment involves behaviour modification, medical treatment and sometimes surgical treatment.

For mild cases of sleep apnea, the treatment often starts with behavioural therapy. Counselling for behavioural changes includes losing weight and avoidance of alcohol, sleeping pills and sedatives. These pills relax throat muscles, contributing to the collapse of the airway at night.

Most patients snore sleeping on their back. These patients should be asked to train themselves to sleep exclusively on their side. One way to do this is by sewing three or four tennis balls at the back of an old shirt. Wear the shirt when you go to bed and you will never sleep again on your back. It will be painful. It works and it is cheap. This can prevent the tongue and palate from falling backwards in the throat and blocking the airway.

For moderate to severe sleep apnea, the most common treatment is the use of a CPAP. CPAP is delivered through a mask to be worn when a sleep.

CPAP therapy is extremely effective in reducing the episodes of apnea. But some patients find it uncomfortable. The mask is not easy to fit your face and it is not easy to sleep with. One study demonstrated 46 per cent of patients used CPAP for more than four hours per night for more than 70 per cent of the observed nights. Others have adapted to CPAP quite nicely. Some studies have shown improved survival in patients who use CPAP.

Oral dental appliance has been promoted as a useful alternative to CPAP. It is a custom-made mouthpiece that shifts the lower jaw forward, opening up the airway. There are a variety of appliances. The appliances are worn only during sleep and are generally well tolerated. Not all patients have clinically proven response. It is considered as a second line of treatment compared to CPAP.

Surgical treatment for snoring and obstructive sleep apnea has become quite popular. Probably due to the inconvenience of CPAP and oral appliance. Surgery is considered if only other methods fail. Several surgical procedures are available, each one with advantages and disadvantages. These procedures are done by Otolaryngologists (specialists in ear, nose and throat surgeries).

There isn’t one solution to the problem of snoring and obstructive sleep apnea. Weigh your options carefully. Have yourself checked out at a sleep clinic and talk to a specialist in sleep disorders. Until then happy snoring.